Why Are Egg Prices So High?

As you’ve probably already noticed, the cost of eggs has been soaring across the country. This is due to a combination of inflation and the highly pathogenic bird flu among other factors. This flu has swept through the country, leading to the death of almost 60 million chickens and turkeys, which has ultimately led to a shortage of eggs on store shelves.

According to a report by CBS (see video below), eggs in California are currently selling for $7.37, which is up more than five dollars from the same time last year when they were $2.35. This spike in egg prices is impacting consumers as eggs are a staple food in many American households. They’re used in a variety of staple foods, such as bread and pie, and are also a substitute for meat for those who don’t eat meat or are trying to save money by eating less of it.

The rise in egg prices is also affecting the price of other food items that contain eggs, such as baked goods. The question on many people’s minds is how long this situation is expected to last. Unfortunately, the answer is uncertain as it depends on how long it takes to get the outbreak under control and how long it takes to replace the mature chickens that were laying eggs.

In the meantime, consumers may need to adjust their budgets and consider alternative protein sources, such as beans and nuts, to help save money on groceries. It is also important to support local farmers who may not have been impacted by the bird flu and to consider buying eggs from them as an alternative. The situation is a reminder of the importance of having a diverse food supply and the potential consequences of relying too heavily on a single source of protein.

Bird flu, or avian influenza, is a viral infection that affects domesticated birds, such as chickens and turkeys. Outbreaks of the disease can lead to significant death loss in flocks, resulting in a decrease in the overall egg supply.

According to the US Department of Agriculture, there have been several bird flu outbreaks in the US in the past year, leading to the culling of millions of birds. This reduction in the egg-laying population has led to a scarcity of eggs on the market, driving up prices.

Another factor contributing to the high cost of eggs is the rising cost of feed for chickens. Corn and soybeans, the main ingredients in chicken feed, have seen significant price increases in recent months. This is due to a variety of factors, including weather events such as droughts and floods, as well as increased demand for these crops for use in biofuels.

According to the US Bureau of Labor Statistics, the price of corn has risen by nearly 20% in the past year, while soybean prices have increased by over 30%. These rising feed costs are passed on to consumers in the form of higher egg prices.

CBS News Takes a Look at The Soaring Cost of Eggs 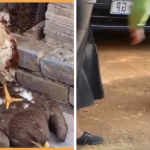