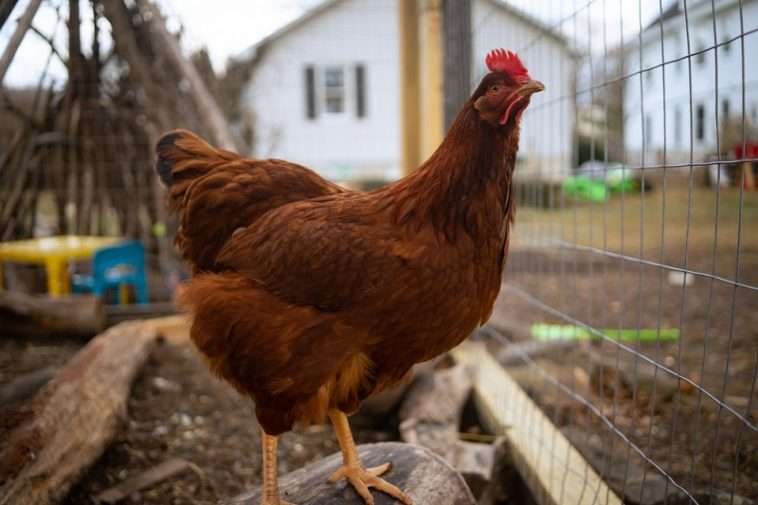 Rhode Island Reds are known for their even temperament, which can be especially important if you’re planning to keep males around. They are also well-loved for the large, brown eggs they are known for laying in large quantities.

Many experienced farmers say that just one Rhode Island Red can lay as many as five to six eggs a week! They are also prized for their meat as they are relatively large, muscular birds.

They are also inexpensive to obtain. Male chicks tend to only cost around $1.50, and female chicks usually cost approximately $2.50.

Finally, the Rhode Island Red breed is known for being very hardy. This means they are healthy, strong, and relatively low maintenance. All in all, if you are looking into tending chickens for food for the first time, then you will do very well to choose Rhode Island Reds. Your choice will give you the greatest chance of success and satisfaction.

Your Guide to Raising Rhode Island Red Chickens for Meat

While Rhode Island Reds are relatively forgiving to raise, that does not mean they don’t require a fair amount of work. But if you take good care of them, they will reward you handsomely.

Unless you start with grown chickens from a neighbor, or elsewhere, you are likely to start with day-old chicks. You will need to construct a brooder, which is relatively simple. Your first brooder can consist of a box with straw or sawdust and a heat lamp.

Monitor them closely to ensure they do not develop issues such as pasting. They should feel modestly warm to the touch while they are small and helpless, but no warmer than that. Be sure the sawdust remains soft and dry.

It is advisable that you construct a higher quality brooder after the first season from wood or tin since cardboard will rot. Clean your brooder and refresh the sawdust at least once a week.

Rhode Island Reds are what is known as a “roaming” breed. This means that they prefer to have a large area in which to wander, forage, and explore. You can deprive them of the space they tend to want, but know that you will be doing so at a cost. Chickens that are unhappy will not flourish. They will produce fewer eggs, breed less often, and they may even become visibly depressed.

Their hardy natures make them well suited to roaming, and if you have the space to provide to them it is strongly recommended that you do. If you do not have a lot of room to give them for roaming, they may still do well.

If they must remain confined to a small area or to the coop for extended periods of time, you should monitor them closely for health and emotional issues. If they fail to flourish, then a change may be required to keep them healthy.

By giving them lots of space, you will enable them to benefit from a richer diet. This is because they will hunt bugs, and the more bugs they eat- the healthier they will be, and their eggs will be more nutritious. Sometimes, they will even eat frogs and mice, which is ideal- believe it or not.

When it comes to your chicken coop, you will want to be sure to construct a high-quality structure. It should be well insulated and free of cracks. While the Red is a sturdy animal, they are also daring. This means that they will experience physical exertion and exposure to the elements.

Because of this, they should have a solid and secure shelter in which to rest and recover. If you have especially cold winters, their Malay genetics will serve them well, but you should still provide them with a heat lamp to protect them from freezing temperatures.

It is also important for the birds to have a solid shelter to retreat to when they must escape predators, which are almost certain to be a problem at some point.

If you have an especially aggressive rooster, it can be a danger to your hens, to other animals, and can even cause minor injuries to humans with its spur. While curtailing a rooster’s attitude might not be in the cards, managing that spur is well within your reach with filing, clipping, and sheath removal.

Attempting to remove the sheath this way may fail the first time you try it. Do not be discouraged. Simply try again, or clip and file the tip of the spur if you’ve had enough.

There are a few special health and care considerations peculiar to Rhode Island Reds, which you should be aware of.

Regularly inspect the watering trough for cleanliness. The more you refresh the water, the less likely it will be to develop mold, fungus, and the like. If you use cleaning products you must make sure to rinse it very thoroughly since even a small amount of bleach or ammonia can harm your chickens.

Feeding chickens is easy, especially if they are free-roaming. Hand feed them with a hanging feeder daily or as needed.

Collecting eggs should be done daily to prevent the eggs from being damaged or dirtied. This is also the best way to make certain your eggs are good and fresh.

Read More: How Many Eggs Does A Chicken Lay In a Lifetime?

Once a month, you should check, clean, and refresh the chicken’s bedding. Remove soiled or moldy bedding and replace it as needed.

Read More: Top 5 Best Bedding For Chicken Nesting Boxes (And Where To Buy Them)

Chicken poop will need to be cleaned up regularly. See to this at least once a month. The more often you do it, the less difficult it will be. In constructing your coop, you may consider a design that is amenable to pressure washing.

Heaters and/or heat lamps and insulation will be necessary if temperatures dip below zero in your location.

Q – Do You Need Roosters to Get Eggs?

A – No. Hens will lay unfertilized eggs regularly. These are the ones that we eat.

Q – How Much Work Does Raising Chickens Require?

A – If your coop is well made and your set up is right, you can expect to care for your chickens an average of twenty minutes a day, occasionally more.

Q – How Noisy Are Chickens?

A – Moderately noisy. Roosters are loud, and they crow quite loudly at dawn.

Q – What if a Chicken Gets Sick?

A – If a chicken becomes ill or injured, you should take it to the vet if you wish it to recover.

Q – Can I have Just One Pet Chicken?

A – Yes, but it is not advised. Chickens are highly social creatures, not unlike humans, and they will only thrive amongst other healthy chickens. You should have at least two.

While most casual chicken owners are primarily interested in getting eggs, there’s also been a growing interest in raising backyard chickens for meat as well.

We’re often asked whether Rhode Island Reds make good meat birds or not, and the answer is yes! However, there are some differences between them and the more popular meat breeds.

When deciding whether Rhode Island Reds are the right meat chicken for you, there are some important things to consider. They are a dual-purpose heritage breed, which means they were originally developed for both meat and egg production.

Essentially, they were bred to produce everything that a nineteenth-century farmer would need from a chicken. This makes them hardy, easy to care for, and good producers. Some modern strains have been bred with more of a focus on egg production in recent decades, but they still tend to produce decent meat.

On the other hand, what most people think of as meat chickens are a little different. These chickens, often Cornish crosses or similar breeds, were bred without much concern for egg production.

Instead, the focus was on soft, tender meat and fast growth and development, which allows farmers to process them at younger ages.

Pros and Cons of Raising Rhode Island Reds For Meat

The big reason Rhode Island Reds aren’t popular meat birds among commercial farmers is because of their slow rate of growth.

While a single-purpose meat breed might be large enough to butcher at eight to ten weeks old, a typical Rhode Island Red will require four to six months to reach full size. This requires a bit more patience and planning on the part of the farmer, as well as more work and resources invested in them.

In addition, even a full-sized Rhode Island Red is likely to be smaller than a Cornish cross or other meat bird. This can be great if you’re feeding yourself or a smaller family, but it makes them less viable commercially and may not make them a great choice if you’re planning on serving home-raised chicken for a big party.

One major benefit is that Rhode Island Reds tend to be fairly self-sufficient compared to larger meat breeds. They can do much of their own foraging and are generally cleaner and hardier. While they do take longer to grow up, you may not have to spend as much time on daily care for them.

But How Do They Taste?

If you’re expecting the same mild flavor and tenderness as a meat breed, you may be disappointed. However, Rhode Island Reds still produce delicious meat.

When it comes to flavor, Rhode Island Red chicken meat tends to have a mild but gamey flavor to it. It also tends to be a little tougher overall, but it softens nicely when cooked properly.

Meat from Rhode Island Reds is great in slow cooker recipes, stews, or when prepared in a smoker. Overall, most people who have tried it agree that the meat tastes excellent when prepared correctly. 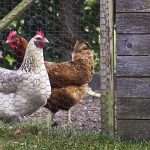 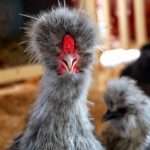