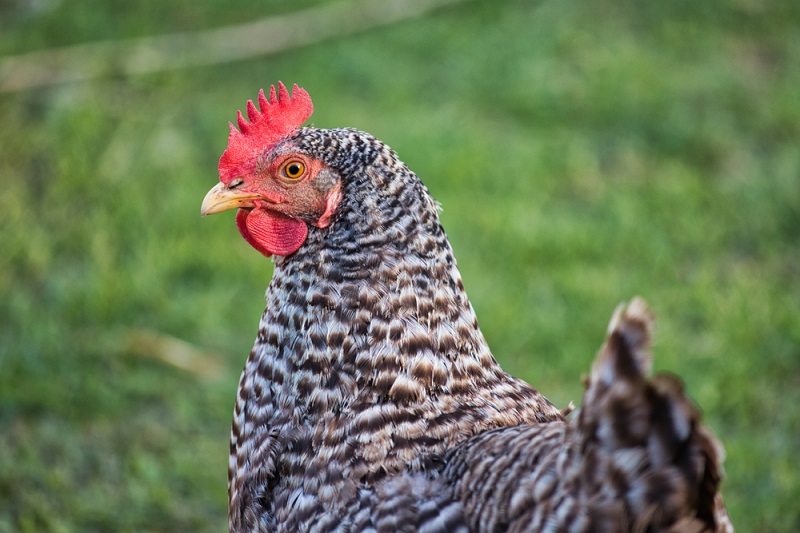 The Hen's Loft is an Amazon Associate and is reader-supported. That means some of the links are affiliate links and if you buy through these links, I earn a commission at no additional cost to you.

Plymouth Rock is one of the oldest chicken breeds in America. They top the list of excellent dual-purpose poultry breeds. They have excellent table quality meat and are prolific layers. Their claim to fame came about when they were encouraged by the Government in World War 2 to feed the troops overseas as well as those at home. They became a mainstay for America for both their eggs and meat.

These birds have an interesting history. From their development to their mysterious disappearance, this breed has stood the test of time and is one of the best all-around chickens you can raise in your backyard flock.

Sometime in the middle of the 19th century, the Plymouth Rock was developed in America. It made its first appearance as a breed in an exhibition in Boston, Massachusetts in 1849. In a strange twist of fate, the breed totally disappeared from public view for two decades.

Mysteriously, the Plymouth Rock reappeared in 1869 at a poultry show in Worchester, Massachusetts. There were the forefathers of the breed we know today. Several people took credit for creating the breed. The mix was created using Spanish, White, and Buff Cochin, Dominique, Black Java, and Brahma chickens. The original Rocks were barred and the other varieties were developed later.

When our country was set in crisis mode during World War II, there has been no single breed of chicken kept and bred as extensively since that time. Not only were they excellent for laying and eating, but they were also hardy, docile, and great mothers. Plymouth Rocks fed our country and our soldiers and aided our country in a time of great need.

Around 1920, Plymouth Rock was a staple for the broiler industry. They are now bred and raised all over the world. It may be difficult to find a pure form of this breed. Many poultry enthusiasts are working to preserve the heritage breed.

Physical Description of the Breed

This iconic breed is best described as being colored with black and white bars. They are sturdy, heavy birds with a large and plump breast. Their legs and beaks are yellow. Other features of the Plymouth Rock include a bright red single comb, face, earlobes, and wattles. They have five serrated points on their comb, with the middle points being the highest.

Their plumage is defined by the crossing of the sharply defined black and white parallel bars. Their feathers are loose and they come in a variety of colors, but the most famous is the black and white barred. Their legs are clean with no feathers. They have a soft and downy underbelly. They have a yellow skin color which is frowned upon for meat birds by those living in England.

Roosters and hens are similar. Hens have smaller combs, earlobes, and wattles. They carry their neck slightly more forward and the tail is smaller. Roosters have larger tails that are carried more upright. Their stripes or bars are of equal width. Hens have wider and darker bars giving them an overall darker appearance.

Fun fact: The hackle feathers of the Plymouth Rock are used for fishing lures.

The number of eggs produced by each of the Plymouth Rock varieties differs slightly. On average, a Barred will lay around 200 eggs a year or around 4 a week. The eggs will be shades of darker brown and large. A hen will start to lay between 16 and 20 weeks old. Their eggs may be small at first, but they will grow bigger in size as the hen matures.

Rocks will have their most productive laying years from 1 to 3 years of age. After that, their productivity will start to decline. While it does decline, some Plymouth Rock hens have been recorded laying until 10 years of age.

As far as being broody, they aren’t particularly known for their broodiness but it can be encouraged quite easily. Once they become broody, they will be great moms and baby sitters.

Both hens and roosters of this breed are calm, friendly, interact well with people, and make great pets. Since they are so docile and friendly, they make great candidates for the backyard farmer that involve their children in the chicken raising experience.

Raising Plymouth Rock, you don’t have to worry about an aggressive rooster attacking your children. If the kids have a desire to exhibit their chickens, these birds travel easily and do well with being confined. Even though they are comfortable with being confined, they are happiest when they can roam and free-range.

These birds are on the heavy side so they don’t fly well. They will be easy to keep in the coop without having to build high fences. As far as their noise level, they are talkative but known as relatively quiet birds.

This breed is very inquisitive. They will greet you at the door of the coop or follow you around your yard investigating what you are doing and hoping to find that special treat. Don’t be surprised if you let them free range and they end up on your porch, looking through your front door.

The Plymouth Rock is a healthy and hardy breed. They don’t have many ailments except for parasites which are a plague for all poultry.

Roosters have large combs and wattles. They may need some extra protection when it falls below freezing for extended periods of time. Frostbite can be prevented by offering a heat lamp in the coop, or by rubbing petroleum jelly on the combs.

Since they do have dense feathering, in extremely hot conditions, make sure you provide good ventilation in the coop, access to fresh, clean water, and shade. This will help prevent overheating.

Expected Lifespan of the Plymouth Rock

These birds are so healthy and have so few health problems, they have an excellent life expectancy as far as chickens go. Their average life span is 10 to 12 years. Some Rocks have been known to live up to 20 years.

Pros and Cons of Owning a Plymouth Rock Chicken

5 Reasons to Add a Plymouth Rock to Your Flock

1. The Plymouth Rock has beautiful feathering and is an aesthetically pleasing bird to add to your flock.

2. These birds are excellent egg layers and are also known for their outstanding table quality.

3. If you have children, Plymouth Rocks are docile, friendly, and make excellent birds for exhibiting or even as pets.

4. These birds are heavy enough to be poor flyers. They are kept in the coop easily without having to build high fences. They are easy keepers and are known to be quiet yet talkative.

5. Plymouth Rocks are extremely hardy and don’t have health issues. Their breed has a long life expectancy.