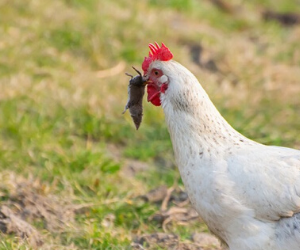 Is It Safe For Chickens To Eat Mice?

Walking in on your chickens brutally devouring a small creature can be upsetting, but many chicken farmers have been through this and it’s generally nothing to worry about. We typically think of chickens as herbivorous creatures, or we just think that all they eat is chicken feed and table scraps.

Yes. Chicken do eat mice. And it’s important to remember that at one point in time, chickens were actually wild creatures that could survive on their own without the help of humans. Deep down, they’re omnivores, and chickens are ready to eat just about anything you put in front of them.

Are There Benefits of Chickens Eating Mice?

Most chickens aren’t particularly intelligent, but they do benefit from having a somewhat enriched environment that they can interact with. An occasional mouse will mix up their diet and make their lives a little more interesting.

Also, mice are a very nutritious snack for your chickens. Chicken feed can take care of the majority of their dietary needs, but egg-laying hens need quite a bit of food in order to sustain daily egg production. This makes mice an excellent choice. They are high in protein, and their bones are also high in calcium. This can result in sturdier eggshells and richer yolks.

Most of the time, you won’t have to worry about your chickens eating the occasional mouse. This behavior is only concerning under very particular circumstances.

In the vast majority of cases, there’s nothing concerning at all about a chicken eating a mouse. It may be out of the ordinary, but there’s nothing inherently harmful about it. If you’re still concerned, there are a few questions you can ask to make sure your chickens are being cared for properly.

Feeding chickens isn’t particularly complicated because, for most cases, 100% of their requirements are taken care of by pre-packaged chicken feed. However, abnormal chicken behavior could be a sign of malnutrition.

The second possibility is that your chickens aren’t getting enough protein or other nutrients. This is unlikely to result in such a dramatic behavior change, but it could be one possible explanation.

Chickens are known to eat their own eggs when they’re experiencing calcium or protein deficiencies, so it’s not terribly uncommon for them to venture outside their regular diet. In fact, mice might actually be considered part of their normal diet due to how harmless and common it is for chickens to eat mice.

The other potential concerning factor is poison. If you’re treating an ongoing mouse or rat problem inside or outside the coop, you should pay closer attention to any mice that your chickens eat. In this case, you should actually stop your chickens from eating any mice at all.

If the chicken ingests a mouse that has consumed poison, there’s a chance that the poison could end up harming your chickens as well.

Additionally, the poison could leach into their eggs and muscles, and this could lead to the rat poison eventually making its way into you! At any rate, this is just another reason to avoid using poison in favor of other control measures like cats and live traps.

This is just another reason why outdoor cats can protect your hen house. If a cat is taking care of your mouse and rat problem, you won’t have to lay poison that could end up hurting your chickens later. Cats will also stay away from your grown hens, so you won’t have to worry about the cat turning against you and causing harm to your flock.

While well-adjusted chickens can occasionally be caught eating mice, regular occurrence might go along with other behavior issues in your chickens. While eating mice itself might not be a problem, it might happen alongside other problematic behavior.

If you find mouse-eating behavior concerning, you should take extra steps to make sure your chickens are happy and healthy.

For example, make sure that your hens aren’t in the habit of bullying one another. Sometimes there can be conflict when you introduce new hens and roosters into your flock. If they don’t already have an established pecking order, there is a chance they could fight with one another.

Over time, this can create a high level of stress on your your chickens and cause them to behave more aggressively toward other animals.

Additionally, you could check to make sure your chickens have enough room. Cramped living spaces are uncomfortable for everybody, and this includes the members of your flock.

Insufficient space can also lead to stress in your chickens, and they may be pushed towards behaving aggressively if they constantly have to fight for their own space.

You can also make sure your coop is staying sufficiently clean. Excess manure, dirty water, and insufficient food supplies can all alter the behavior of your flock.

Finally, you can check to make sure your chickens aren’t having any health problems. For example, make sure that nobody in your flock has any infections, injuries, or bald spots.

Chickens aren’t stressed out particularly easily, but things like this do crop up from time to time, and it’s important to be aware of dangers that might negatively affect your farm.

This might seem like a silly example, but chickens can and do protect themselves when they need to. While a mouse is much less likely to attack a chicken than a larger animal like a skunk or a rat, mice can occasionally bother your chickens by gnawing on their feathers. The mice won’t bring harm to your chickens, but your hens will surely find the mice a nuisance.

If you find that your chickens are eating lots of mice, it could be a sign of a more recurrent problem. Chickens don’t typically go out of their way to eat mice, so frequent mouse-eating behavior could tell you that there are too many mice in the area and that it’s time to find some rodent deterrent.

This same principle also applies to rats, but rats are typically considered more dangerous. Not only can they eat more food, but they can also get large enough to kill baby and adolescent chickens.

Rats typically stay away from fully-grown birds, but in extraordinary circumstances they are capable of killing grown chickens as well. However, situations like this would only happen under extreme circumstances, such as prolonged extreme cold weather. In these conditions, rodents can starve, which makes them more aggressive and pushes them inside where it’s warmer and food is available.

If you have a well-functioning hen house, this isn’t something you should spend a lot of time worrying about. Hens and roosters are generally good at sticking up for themselves, and they can even gang up against intruders if it’s necessary.

Yes, chickens do eat mice. So don’t be alarmed if you walk out to the coop and find a few of the hens pecking at a dead mouse. Just be sure to keep in mind the few things that I pointed out earlier about what might drive them to do this…if it in fact becomes a regular event. If not, then don’t worry about it. It’s just chickens being chickens. 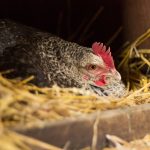 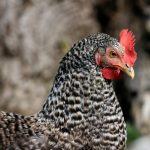