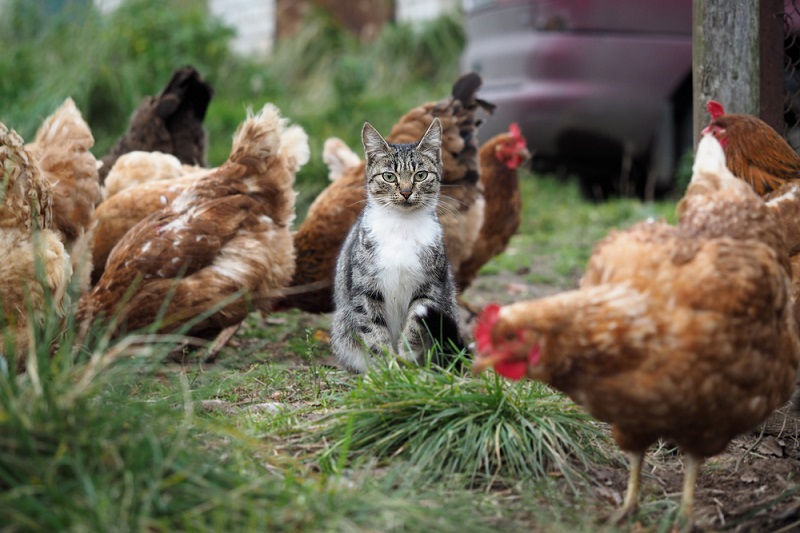 It might make sense to think that cats would pester your flock of chickens. Cats love hunting birds, and chickens are birds. Fortunately, cats tend to go after animals that don’t pose a threat. This means that cats will tend to go after small birds, rats, mice, and occasionally other pets like cats and dogs if they’re provoked.

This also means that cats will tend to avoid going after adult chickens. If a typical cat were to fight with a chicken or rooster, the cat would probably win the fight, but it would also likely get hurt. If a rooster is being especially aggressive, it may provoke an altercation with your cat, but this is unlikely. Most of the time, you would only see a rabid or starving cat attack a chicken, but this is rare.

If you are raising a group of chicks, you should pay closer attention. While cats avoid grown chickens, they love attacking small and defenseless animals. This makes baby chickens a prime target for a cat. Here are a few things you can do to prevent an unfortunate encounter between a cat and your baby chickens.

Keeping Cats Away From Baby Chicks

Generally, it’s safest to raise your baby chickens in some sort of enclosed environment. This could be a barn, basement, shed, or back porch. An enclosed space is important for quite a few reasons.

Firstly, chicks aren’t very good at regulating their temperature on their own. Unless you can count on the outside weather staying above 60 degrees at night, you should plan on keeping them inside. Most owners choose to set up a pen for their baby chicks with at least one heat lamp. This allows the baby chickens to warm themselves up when they’re cold, but it also allows them to escape the heat if it’s too much for them.

You may wish to add or remove heat lamps based on how the baby chickens act. If they are constantly huddled under the lamp, consider lowering the lamp or adding a second lamp. If they are very inactive and panting, you should consider raising or removing a lamp.

Raising your baby chickens indoors also allows you to protect them from predators. Baby chickens are hardly bigger than an egg when you first receive them in the mail. They make noise constantly, they are smelly, and they can hardly run. At this stage, pretty much any carnivorous or omnivorous wildlife could hurt them easily.

When you’re raising baby chicks in the wintertime, this problem changes to some extent. While some wildlife tends to be less active during the colder seasons, non-hibernating animals like feral cats, rats, and possums can get especially hungry. This can drive them to invade human spaces when they normally wouldn’t.

A safe approach would involve raising baby chickens in an enclosed space that is only accessible through a door. Try and patch up any larger holes that a possum or raccoon might be able to get through, and you can place rat traps for extra security.

While a mouse could theoretically kill a baby chicken, it would be more likely to just eat the chicken food. Mice are generally not much of a problem for chicken owners in this regard.

Any deterrent that works against wildlife will likely be effective against feral cats. While they might be a concern for people who own cats as pets, you can keep your baby chickens safe by temporarily housing them in an enclosed area that other animals can’t get to.

Keeping Cats and Other Wild Pests At Bay

While baby chickens are especially vulnerable to cats, grown chickens face a different set of problems. They are typically kept outside, and that makes them vulnerable to predators that wouldn’t even be a consideration if your hens and roosters were kept inside. You should make special preparations to deter raccoons, possums, and coyotes. Due to the geographical location you live in, coyotes may be more or less of a problem. If there is a history of coyote activity in your area, it may be wise to make preparations.

One common deterrent for predators is an electric fence. This can serve to prevent chickens from leaving and predators from entering. Electric fences aren’t usually strong enough to kill any predator, so they are safe to use if you prefer to avoid violently harming any animal. If you’re looking for a stronger deterrent, there are also other options available.

Electric fences typically aren’t very high, so you may wish to pair this with a taller fence if your hens and roosters escape too frequently. For many breeds, a fence that is about three to four feet tall will be enough. A fence like this will generally be enough to prevent coyote attacks. Coyotes also tend to attack in the nighttime, so you can further prevent them from harming your chickens by keeping them in an enclosed coop after sunset.

Live traps are another option, but many chicken owners choose to avoid this until they’ve directly observed a predator attacking their flock. A given area will typically have just a few predators around, and the ones that are present may naturally avoid your area. If this is the case, setting out the trap may merely lure an animal to your area that wouldn’t have otherwise caused any trouble to your chickens.

Live traps are commonly used with some kind of bait. Many kinds of food can work, but fragrant foods like raw fish and wet cat food tend to be the most effective. You can also use something as simple as chicken feed. Many people expect to catch wildlife with a live trap, but there is a real possibility that it could end up catching either a feral cat or your own cat if you have one that lives outdoors. This makes live traps a less appealing option for some people.

Live traps can be helpful in some situations, but you should absolutely monitor them closely and check at least once a day if you do choose to use them. If your trap ends up catching a predator like a raccoon or a possum, you should have a plan for releasing the animal back into the wild. Make sure to drive the animal a few miles away in order to prevent it from returning to your flock, and also be sure that it won’t disrupt any neighbors or landowners in the area.

Some chicken owners have issues with birds of prey that attack their flock. They pose a different problem because flying predators can’t be physically blocked with a fence. The problem of flying predators can be solved with scarecrows, fake owls, and blinking lights. Some people even hang blank CDs along the sides of the chicken fence. As they dangle, the reflective surfaces flash light, which deters flying predators from attacking.

How To Keep Cats Away From Chickens (Will Cats Kill Chickens?) 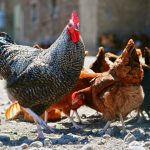 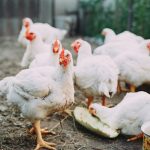