If you live in the Southern states, winter is not much of an issue when it comes to raising chickens. If you’re from the North, the long, cold, dark winter months will take a toll on your chickens if they are not cold-hardy birds. Certain breeds of chickens were developed specifically to resist the cold and lay eggs even during the coldest winter months.

Cold is a relative term. A person from North Carolina will see the temperature drop below freezing and go into a panic. People from Canada don’t see temperatures above freezing for weeks at a time.

What Makes a Chicken Suited for Cold Weather?

Everyone seems to have a different opinion on which breeds of chickens do best in cold winters. You have several breeds to choose from that are adaptable to freezing temperatures. If you live in an area that is prone to prolong freezing temperatures, here are some attributes you may want to consider:

When choosing your breed, keep in mind you still need to supply your chickens with a clean and well-insulated coop. Your chickens must have clean and dry place to roost, access to food and water, and protection from the elements. Always have enough chickens in your flock that they can huddle together to share body warmth.

These three breeds are ideal if you can count on every winter being extremely cold. They were developed in countries and regions where cold weather was a fact of life. As a result, these breeds have learned to adapt in very cold conditions.

Often hailed as “Cold Queens”, Brahmas are large, cuddly, lay in winter, and have a calm demeanor that allows them to still be hospitable when in close quarters during the winter. Let’s look at what features make them well-suited for cold weather.

A cousin of the Brahma, having been bred and raised in Canada makes this breed a superb choice for cold winters.

Known as the ‘All-American Chicken’ the Wyandotte was first called American Sebright after a Native American tribe. Four breeders got together in New York to create a large and hardy foul that would withstand the toughest northern winters.

There are plenty of choices for chicken breeds that will do well in the cold when cared for properly. These next two breeds are considered other examples of birds that are well-suited for winter climates.

The Australorp is well-suited for the cold because of their extremely thick layer of feathers that protect them from winter winds. They are yet another breed of hens that will lay brilliantly all winter long. They are gentle and kind birds that do will when confined with their flock mates when the cold weather hits. Their combs are a bit larger than the first three breeds and may need to be coated with petroleum jelly to prevent frostbite in extremely cold temperatures.

These heavy birds are unusual in that they are not only bred for the cold, but they also tolerate hot weather better than some of the heavier, thickly plumed birds. They weigh in at 7 to 10 pounds and hold the world record for laying 364 eggs in 365 days. If you have hot summers and cold winters, this would be a good breed to consider.

Plymouth Rock, known for their beautiful black and white barred pattern, have been raised in some of the coldest climates in the world. Predominately raised in New England and Great Britain, they have wonderful personalities that suit them well for winter confinement.

This breed has longer wattles and combs that may be susceptible to frostbite. The Plymouth Rock was developed in New England as a multi-purpose bird. They have an impressive laying record and lay an average of 250 eggs a year. They are heavy birds, weighing in between 7 and 8 pounds. They are well-known for their dependability and cold hardiness.

Know Your Chickens has an extensive list of 15 Cold Hardy Chickens taken from a breed guide. The first breed on their list is the ever-faithful and popular, Rhode Island Red.

As the name implies, Reds were developed in New England so of course Rhode Island Reds are well adapted to cold having raised in the Northeast. Extremely popular for their dual purpose of laying eggs and supplying meat, Reds are also loved by many because they are docile, friendly, and are easily made into pets.

What makes them adaptable to cold weather is their size (6 ½ to 8 ½ pounds) , and the fact that this bird can survive in any condition. Hot, cold, and anywhere in between, they are low maintenance and they will supply you with around 300 large brown eggs a year.

If you’re looking for an interesting cold-hardy chicken, check out the Buckeye. This breed’s claim to fame is that it is the only recognized breed of poultry developed by a woman. It was accepted into the American Poultry Association in 1904, is a dual-purpose breed, and hails from the state of Ohio.

Buckeyes are touted for their ability to survive in cold temperatures. Besides their weight (6 to 7 pounds) and insulating feathers, they have small ‘cushion combs’ which are less susceptible to frostbite. Their pleasant temperament allows them to handle confinement well in the long and cold days of winter. Respectable egg layers, a hen will produce 150 to 200 eggs a year.

If you want a unique, cold-hardy chicken, you might want to consider the Welsummer. Developed in the Netherlands, this attractive breed was brought to the US in the early 20th century. Welsummer is a dual-purpose breed weighing 6 to 7 pounds.

The Welsummer is slow to mature, but once fully grown, they are extremely cold hardy. They are active birds, are known to be friendly to other breeds, and for a chicken, are actually quite intelligent!

Orpingtons come in several types, the most popular is the Buff. All of the Orpington varieties will do well in cold weather. These birds are cold hardy due to their abundantly fluffy plumage. They also have single, small combs that make withstanding the cold a bit easier.

Laying 200 to 280 brown eggs a year, and great for meat and eggs, the Buff Orpintong weighs in between 7 and 8 pounds. Their fun-loving temperaments make them a fan favorite for those who love friendly and affectionate foul. They are often said to be the best breed of chicken for children.

Mix and match or pick a single breed of cold-hardy chickens. There are many to choose from, but when making your decision, there are a few guidelines on what might make a breed of chicken not suitable for cold weather. 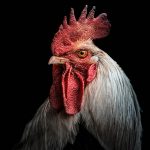 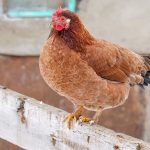