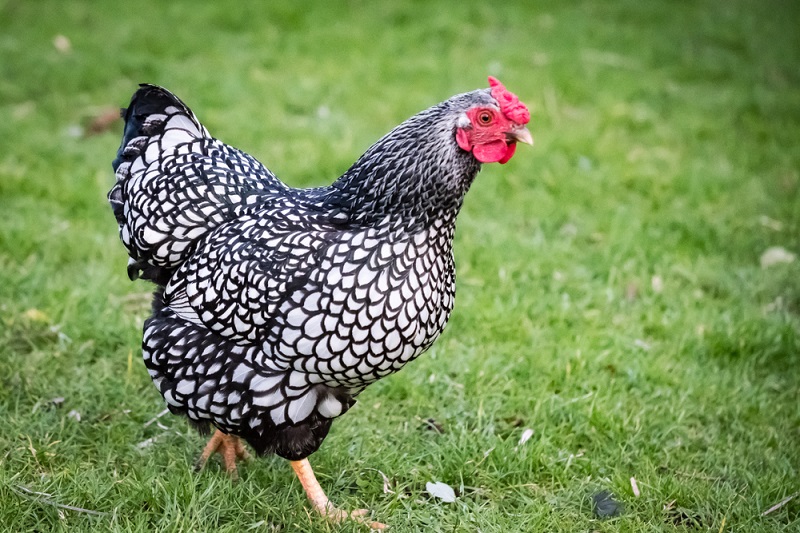 What exactly is a dual-purpose chicken? Dual-purpose means that certain breeds of chickens are all-purpose in that they are good layers and can be used for their meat.

Why Would You Want a Dual-Purpose Breed of Chicken?

Today, we have taken chicken breeding to a new level for mass production and profit. Breeds are refined to be better egg layers or have better quality meat. These are called “industrial” breeds. For the chicken raiser, the homestead breeds are the most popular as they have the well-rounded qualities of being good egg layers but can also be harvested for feeding families.

It’s also important to know that several of the heritage breeds are on a watch list by the the Livestock Conservancy. If you are considering raising your own chickens can you can help repopulate endangered breeds by choosing one on the watch list. Most of the breeds on the watch list are heritage.

There are many advantages to choosing a heritage dual-purpose breed. You get a hardworking, larger bird that will be healthier, hardier, and less flighty. They will be easier to care for and have fewer health issues. When you select heritage, you are helping keep those breeds alive.

Below is a list of what I’ve found to be the best dual purpose breeds of chickens; meaning they are excellent egg producers as well as great meat chickens.

Rhode Island Red (RIR) is one of America’s most well-known breeds of chickens. RIR is iconic, distinctively attractive and has been immortalized in art and literature since the 1800s. They are well-loved by everyone from the backyard chicken raiser to homesteaders. They are heavy, great egg layers, personable, and a beautiful bird.

This breed began with a series of poultry breeding experiments in 1854 by the chicken enthusiast, William Tripp. Tripp was a sea captain who made voyages between England and New Bedford, Rhode Island. His ships carried chickens to provide meat and eggs for the journey.

During one of these voyages, Tripp came across another sailor from England who was carrying a red Malaysian rooster on his ship. Tripp was so impressed with this bird that he purchased the rooster and set it free to breed with his flock.

The Rhode Island Red eventually caught the attention of chicken farmers as the breed continued to be refined and improved. The new breed of chicken was then called “The Macomber” or “Tripp’s Fowl”. The breed made its North American debut when American chicken farmer, Isaac Champlin Wilbour, purchased his first RIR on one of Tripp’s voyages back to Rhode Island.

Wilbour saw the potential of the RIR breed. He purchased Tripp’s Fowl and initiated his own crossbreeding program. He added several more breeds to the cross, the Shanghai, Java, and Brown Leghorn to create what we know today as the Rhode Island Red.

What to Expect with a Rhode Island Red

As previously mentioned, there are two strains within the Rhode Island Red breed, industrial and heritage. Heritage is best for egg production and are not as well known for their meat but are fine for stews and soups. Industrial birds are smaller and less brightly colored and have a higher meat quality.

The heritage strains of Rhode Island Reds are on the “watch” list by The Livestock Conservancy. The concern is that the “old-type” or heritage, is decreasing in number as the breed, in general, is changing to meet industry standards.

• Like to chatter and announce when they have laid an egg

• Do well in a coop or free-range

• Easy keepers with no health issues

If you purchase your Rhodie from a feed store or hatchery, you most likely will be getting an industrial strain. If you want heritage you can locate a breeder in your area and ask to see the documentation that you are purchasing a pure heritage strain.

Another incredible breed of chicken, the Black Australorp, is touted as one of the best dual-purpose chicken breeds. Their main claim to fame is their fantastic egg production. They hold the record for a hen laying the most eggs in one year.

The Australorp is one of 8 poultry breeds originating in the country of Australia. It is so successful that it has become the honorary national bird. The original stock was imported from England back in 1890 through the early 1900s.

There was much controversy and confusion over making this breed recognized according to the Australian national standard. In 1925, Wal Scott made it his mission to have the breed recognized by the Poultry Association. It wasn’t until the 1920s that all the problems were ironed out and the breed was launched internationally.

Many countries placed orders for these birds. Unfortunately, only a year later, a new industrial breed proved to be even better layers than the Australorp. The industrial interest immediately shifted to the new breed and the Australorp fell in number to the point they were placed on the watch list.

What to Expect with a Black Australorp

This heavy breed is one of the current favorite dual-purpose chickens. The Australorp has been adopted as family pets because of their sweet temperament. They are large and are also a good supply of meat.

• Extremely gentle and are good for families and children

• Not flighty, too heavy to fly well

• Can be broody and make good mothers

• Lay all year despite weather and season

• Do well in coops or free-range

• Easy keeps with no health issues

If you are looking for birds that can be family companions as well as good egg layers, you might want to consider the Australorp. They are certainly a bird that can be harvested for meat as well.

This British breed was developed in the 19th century to be a dual-purpose breed. It was well known for both its meat and egg-laying capabilities. It also evolved into an exclusive show bird.

The original Black Orpington was crossed with Minorca, Langshan, and Plymouth Rock. It was purposely kept dark to hide dirt and soot for those who exhibited the breed. The breed took off in 1895 when presented at a breed show in Madison Square Garden.

Today, the Orpington is known as a quality dual-purpose breed for both eggs and meat. There are several color variations of this breed, the most common is the buff Orpington, a light brown bird with a red comb and face. There are both full size and bantam varieties.

While the Orpington is considered a utility breed, it is often bred for show purposes. Because of the focus on showing, the breed has lost some of its ability for egg production as appearance has been bred over the ability to lay eggs.

What to Expect with the Buff Orpington

The Orpington was originally a British bird crossed with other dark birds to hide the grime and pollution of the London Factories. It was bred to be a productive layer as well as a good meat bird. It is a hardy bird with a good personality and would be suitable for homesteaders or backyard chicken raisers.

This breed will not do well in extremely warm temperatures unless they have good ventilation and shade. They can be prone to obesity if they don’t get sufficient exercise.

• Orpington are heavy birds that can weigh 7 to 8 pounds

• They are non-aggressive and are great for kids and families

• They don’t do well mixed with aggressive breeds

• Quiet birds that do well in the city or suburbs

• Do well in confinement

• Lay in all seasons

The heritage breed is known to be healthier than the industrial hybrids. They exhibit more classic behaviors such as foraging and dust bathing. They are pleasant birds, and easy keepers that will keep you well-supplied with meat and eggs.

Read much more about this favorite chicken breed of mine in my article, Buff Orpington Chicken Breed | Everything You Need To Know.

Plymouth Rock (also known as Barred Rocks because of the color) is one of the oldest breeds in America. It was a breed that was seen across the nation, and in World War II, was one of the main sources of meat and eggs in our country.

This breed not only fed our troops abroad and families at home during World War II, but they were the most loved breed in America. Unfortunately, after the war, chicken breeding became highly industrialized. Common breeds like the Plymouth Rock dwindled in numbers.

Plymouth Rocks were first seen in the state of Massachusetts in 1849. Then, mysteriously, the breed disappeared for around 20 years. In 1869, a chicken farmer named Mr. Upham began breeding barred males with Java hens with the hope of producing barred plumage with clean legs.

There were disputes about the standard for this new breed. In 1870, the New York Poultry Society set the standard that all Plymouth Rocks must have single combs so as not to be confused with Dominique who must display a rose comb.

These birds are most distinguished because of the appearance of black and white bars on the plumage. There are variations in the bars between genders and varieties.

What to Expect with the Plymouth Rocks

Like many of the chickens bred in a northern climate, the Plymouth Rock is hardy, free of health issues, and can tolerate extreme temperatures. They are known to thrive even in adverse conditions, and have a pleasant temperament. They are good for families and children.

• The oldest and most distinguished breed is the barred variety

• Sturdy triangular body with a full breast and long back

• Has a bantam and several other varieties

• Are not broody but can make good mothers

• Good in coops or free-range

• Are hardy and lay in all seasons

• Have been recorded living to 20 years old

The Plymouth Rock make great backyard birds as they are so hardy and have no special needs. They have a decent egg production and dress out nicely. They are friendly and slightly chatty and will be a steady and reliable bird.

Originally known as the American Sebright, the Wyandotte is an American breed developed in the 1870s. It was named for the indigenous Wyandot North Americans. It’s another popular dual-purpose breed that is a good producer of eggs, has ample meat, comes in many colors and varieties, and is a popular show bird.

In the 1870s, the Wyandotte breed was developed by a think tank of four chicken farmers. The origin is shrouded in mystery; however, it is rumored that Hamburg and Brahma were important in the initial crossing of the breed.

The Hamburg would have contributed to the rose comb and the Brahma the color pattern. There were several breed varieties created by crossing the Wyandotte with silver and gold-laced breeds. Buff, black and other varieties are known within this breed. It also has a bantam variety.

The Livestock Conservancy listed the Wyandotte as “recovering” in 2015 after a serious decline was noted for the breed. They were taken off the list and deemed no longer in danger in 2016 as farmers took action to promote the breed.

New color variety are still being created all over the world. The Chocolate Partridge is the most recent color creation.

What to Expect with the Wyandotte

The Wyandotte is a dual-purpose breed with American history of being quality egg layers and a producer of good meat. It’s a breed that matures rapidly and it comes in 9 variations of color and patterning. The Wyandotte is a popular show bird, especially in Germany.

• Have an endless variety of colors

• Popular worldwide for beauty and egg-laying

• Lay through all seasons

• Love to free range but do well in confinement

• Especially hardy in cold weather, good in any climate

• Extra fluff under tails can get messy

The Wyandotte is most famous for its amazing color varieties. It’s a hardy, healthy, easy-to-raise bird that will be reliable for laying eggs and can provide good meat. This breed has no health issues and is one of the most visually striking of the dual-purpose breeds.